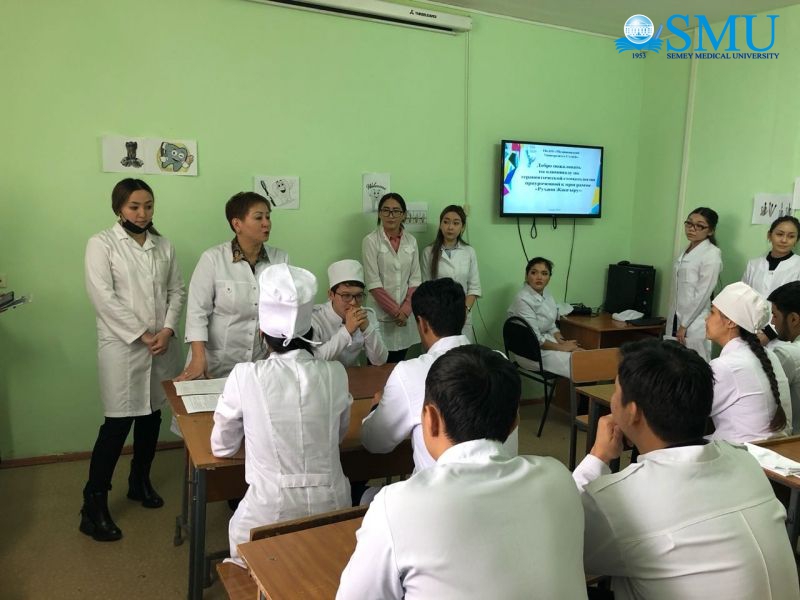 On October 29, 2018, at the Department of Dental Therapy, Associate Professor Haidarova N.B., a subject Olympiad was held in the discipline "Clinical Endodontics" among 4-year students of the Faculty of Dentistry dedicated to the program "Rukhani Zhangyru"

The purpose of the competition was to maintain and develop the cognitive interests of students in this sphere. In the competition took part: 403, 404, 405, 406 groups in the amount of 30 students of the Russian and Kazakh department of the Faculty of Dentistry. The Olympiad includes 4 stages: 1st round – testing, 2nd round – “Own game”; Round 3 – solving situational problems in a team  work, Round 4 – Likbez (final round). The response of the teams was evaluated by members of the jury, which included representatives of the dean's office, department teachers and students.

Such events allows all interested students to test their knowledge of the studied discipline in a competitive environment. The manifestation of team cohesion, identifying leadership qualities of students. Actively maintaining competitiveness among the younger generation under the program “Rukhani Zangyru”.

Visit of the external expetr comission
06.01.2023
Go to Top
Skip to content