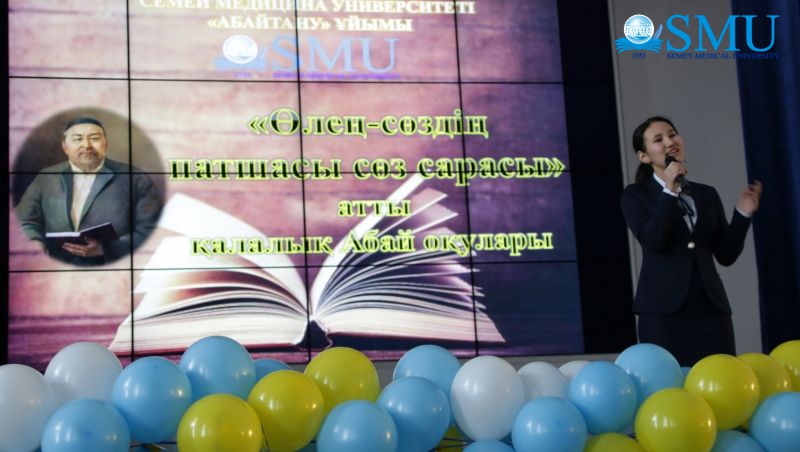 On February 26, at the Semey Medical University, with the support of the «Abaytanu» circle, a contest of “Abay readings” was organized at the city level, dedicated to the 174 th anniversary of the birth of Abay Kunanbayev, in honor of the “Year of Youth” and thanks giving day.The competition was attended by universities, colleges and school children Semey. The competition was held in stages II. The first stage, “«Өлең- сөздің патшасы,сөз-сарасы» , read Abai’s verses by heart. Stage II – expressive reading of Abai’s poems by representatives of other nationalities.

Before the start of the competition, M.D.Zhorakpayeva, head of the department of philological disciplines,wished good luck to the participants and made a welcoming speech.Among the jury members were invited, winner of the poets, international and national competitions – Igilikov Bauyrzhan Alpysovich, director of Semey regional branch of the Union of Writers of Kazakhstan Map Merey Meyrtaevich, head of Semey youth organization Sogymbay Olzhas Amangeldievich, head of the museum of Abai Seytzhaparova Meiramgul and head of the reading room, the library name Abaya Zhanar Milatovna.At the end of the first stage, I place was taken by Assem Mukhamedzhanova, a pupil of the 9th grade of secondary school №16 named after T. Amanzholov. II place – Rakhmanbekova Gulmira, 2nd course student at Semey Medical University and Amangul Serikkyzy, 2nd course student at Pedagogical College named after M.Auezov. 3rd place – Kalzhan Sara, 2nd course student at the Kazakh Innovation and Humanities Law University and Kayranbayeva Arailym, 2nd course student at the Pedagogical College named after M.Auezov. According to the results of stage II, 2 participants took the first place, as well as Khalid Sametova, a 3rd course student of the Pedagogical College named after M.Auezov. II place – Ibragimova Alsu, a student of the 1st course of the Semey Medical University. At the end of the competition, the jury presented letters and diplomas to the participants and managers.The Semey youth resource center sponsored the winners and awarded valuable prizes. As a result of the competition, the leader of the circle "Abaytanu", a teacher of the department of philological disciplines Zh.K.Zhayrbaeva congratulated the winners and expressed warm wishes.