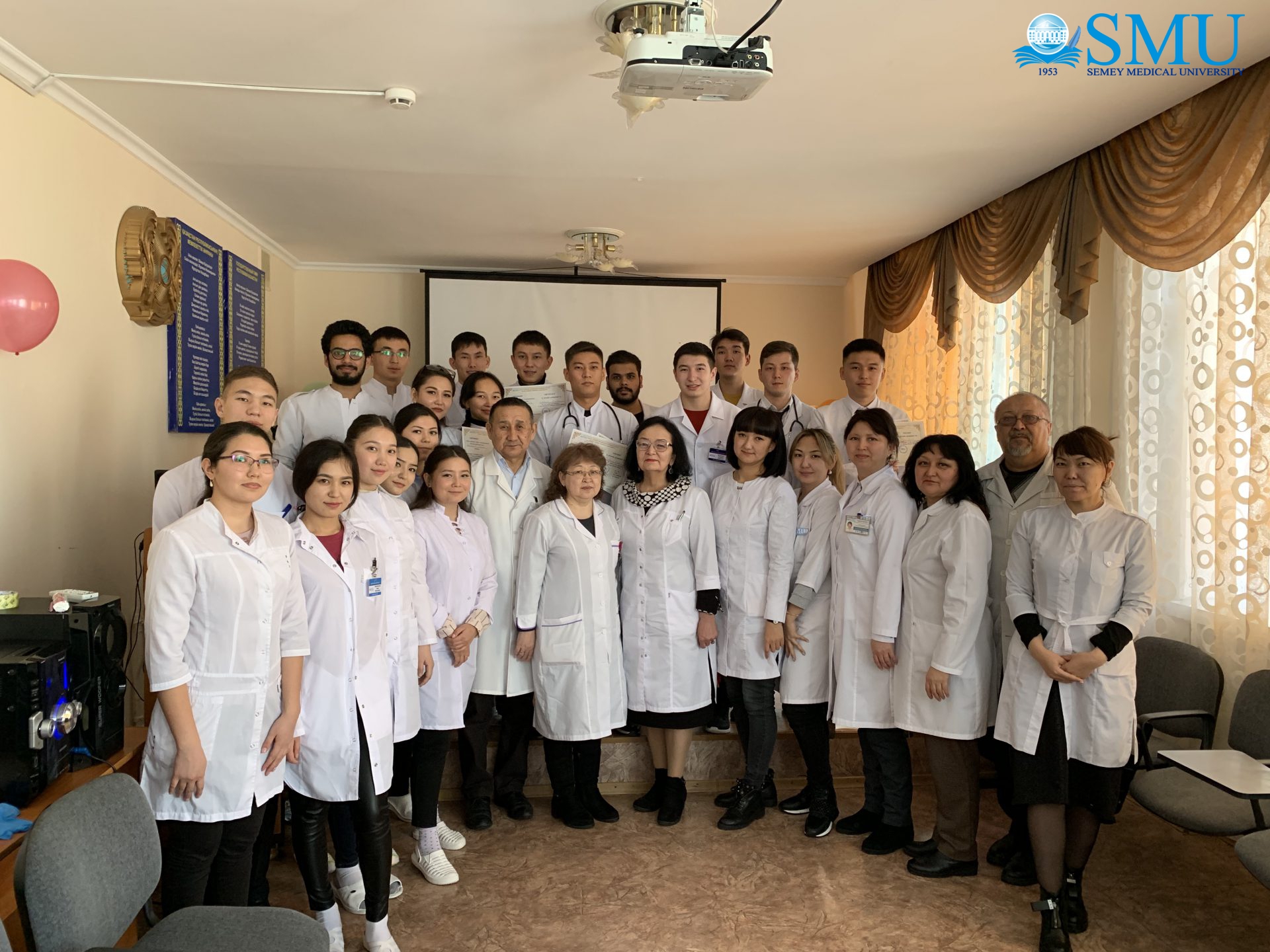 Olympiad “Young Clinician – 2020” was organized by the department of Family medicine among 5th year General Medicine students on 18th of February 2020. Organizers of the Olympiad are students of 536 group General Medicine and professor of the department Adilgozhina S.M. Head of Family medicine department MD Kazymov M.S. made introduction speech with wishes of luck. Deputy director by the treatment and preventive work of “Polyclinic №1 of Semey” Tuleutayeva G.E. was the head of jury.

Selective part of Olympiad was 13 groups of 5th year students of General Medicine specialty. According to the results of test 10 students who got the highest points passed selective part and were directed to the main part of the Olympiad, among them there were students of foreign department. According to multilingualism politics of the university Olympiad was held on three languages: Kazakh, Russian and English.

The Olympiad consisted of 3 contests, where the first was “Baige” conducted using mobile application “Kahoot!”. 6 students who received maximum points in the first competition went to the next round. The second in the competition was a quiz in the format of “My Game”, where participants were asked questions of differentiated complexity according to the categories of internal medicine, surgery, childhood diseases, obstetrics and gynecology studied in the module. A participant with a specific game strategy was able to win this difficult competition. The last competition was the analysis of a clinical case with the rationale for the diagnosis, treatment and diagnostic tactics from the perspective of evidence-based medicine and demonstration of practical skill. In this competition, 4 students who completed the previous stages were able to show a professional approach, competence and clinical thinking. While participants were preparing for the tasks, the survey game was conducted among viewers – students of 5th year. Students who answered quickly and correctly to interesting questions in medicine got the prizes.

In conclusion, the deputy director for the treatment and preventive work of the polyclinic Polyclinic N1 of the Semey city, Tuleutayeva G.E. gave feedback, expressing satisfaction with the organization of the Olympiad and its content. According to the results of the Olympiad, Ainabekov Rinat 501 OM took the first place, the second place – Gafurov Rail 512 OM, the third place – Mukiev Serik 503 OM. Letters and certificates and valuable prizes awarded to the participants of the Olympiad, also valuable prizes to all participants and organizers of the Olympiad. Sponsor of prizes was pharmaceutical company “Takeda”. Throughout the event, the communicative spirit of partnership and support reigned in the hall.

At the Department of Microbiology named after Professor M. M. Urazalin an online master class of visiting professor Novak A. I. was hosted
03.02.2023

Winter School at the Department of Infectious Diseases, Dermatovenereology and Immunology
02.02.2023

Seminar for students of SMU, NCJSC on learning of clinical protocols of influenza/ARVI/COVID-19 among children and adults
02.02.2023
Search
Subpages