Seminar “Children as agents of change”

You are here:
Scientific work 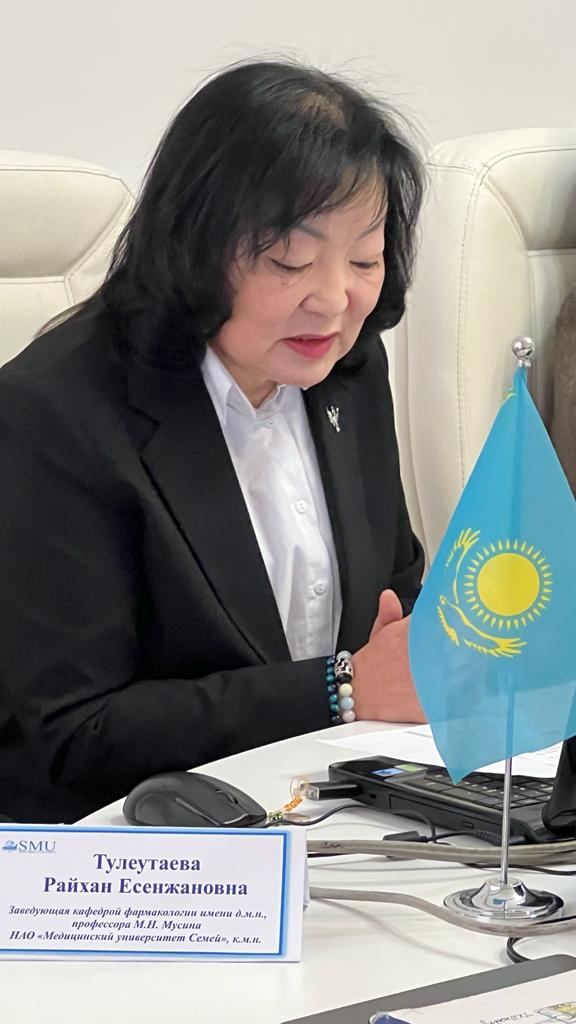 December 7, 2022 Pharmacology Department named after Dr.habil., Professor M. Mussin held a seminar according to the Plan of ISIUM (International Society to Improve the Use of Medicines) and the work plan of on the topic “Children as agents of change”.

According to the plan of the seminar, 4 reports were presented.

Natalia Chebotarenko, President of CoRSUM (Coalition for the Rational and Safe Use of Medicines) in Los Angeles, delivered the first talk “From Science to Practice: Can School Students Play a Role in Promoting Rational Drug Use in Their Community?”. Natalya Alexandrovna also presented the results of the work of the Coalition, including cooperation with Semey Medical University.

Tuleutaeva R.E., Head of the Department of Pharmacology, made a presentation “How children in Kazakhstan perceive medicines”.

The history of the study of the problem dates back to 1996, when the United States Pharmacopeia (USP) initiated the Children and Drugs program, within which the Ten Recommendations for Teaching Children and Adolescents to Take Medications were published. The guide stated: Children want to know.

The uncontrolled use of drugs has led to the fact that the last decade is characterized by resistance of microorganisms to antimicrobial drugs.

Global Strategy for the Containment of Antimicrobial Resistance (WHO, 2001) recommended:

Educate patients and the general community on the appropriate use of antimicrobials;

educate patients on the importance of measures to prevent infection…;

educate patients on suitable alternatives to antimicrobials for relief of symptoms…

In 2001, the World Pharmacy Congress of the International Pharmaceutical Association (FIP) adopted a policy statement on the responsibility and role of the pharmacist in drug education for children and adolescents. “Children daily receive messages about medicines by observing family members, by taking medicines themselves, by watching television and movies, by exposure to media advertising, from their peers and through visiting places where medicines are sold,” said FIP in a 2001 statement.

Today, acute respiratory diseases are a significant problem of modern pediatrics. Up to 70,000 cases per 100,000 of the population are registered annually, and in children this figure is 2.7-3.2 times higher. It is necessary to clarify the risk factors and causes of increased respiratory morbidity in each child.

We conducted a study in which 350 middle and high school students and their parents took part.

The aim of the study was to study the practice of treating colds and flu in children of different age groups. It was concluded that the awareness of schoolchildren and parents about the use of antibiotics in the treatment of colds and flu is quite low, it is necessary to carry out large-scale measures to prevent the irrational use of antibiotics in pediatric practice.

Pharmacology Department named after Dr.habil., Professor M. Mussin since 2007 carries out preventive work in schools and boarding schools in Semey within the framework «Research work of students». Classes with schoolchildren are held in an interactive format with the participation of teachers of students and schoolchildren.

The practice of holding seminars continues from year to year, students are involved in research work, form teamwork skills and develop public speaking and organizational skills.

The third report “How children of preschool age can pass on knowledge to their parents” was presented by Svetlana Shchetinina from Moldova, in which she presented the results of her joint work with students.

At the end of the seminar, Alisha Maratova, a student of the Nazarbayev Intellectual School in Astana, presented the results of the study in the report “Medicine use through the eyes of a teenager from Kazakhstan”.

“Knowledge, attitude and practice of the use of antibiotics in the Abay and East Kazakhstan regions, and in Almaty”
31.01.2023

The meeting of the SNC was held at the department of general medical practice of the Ust-Kamenogorsk branch of the SMU, NCJSC
05.01.2023